It’s been a busy and weird fall and I’ve had little time to do anything creative, which has been driving me a bit mad. We had a great summer, culminating in a stay with my sisters, nephew, and Jon and a quaint and lovely lakehouse in Hebron, New Hampshire. I honestly can’t remember in recent history feeling so completely decompressed as I did that week. Lovely.

Then, with labor day, work started getting busy again and I developed some annoying and continuing digestive health issues, involving more trips to the doctor than I’ve had in decades. It’s been frustrating and time consuming, though I honestly don’t think it’s anything serious. Another appointment on Monday with a GI NP so we’ll see…

At the same time, I got a big freelance project that took up most of my time on weekends and some nights as well. It was intense but short term, so in the end, I thought it was a great way to fill the cash kitty up for house projects. And it was! It’s been a flurry of activity over here. In just a few months, we’ve:

Overhauled the whole master bedroom. We got the carpet ripped out and splurged on hardwood floors. We chose some wide planked hickory, which I really liked for its combination of simplicity with a little warmth. Then, we got a new bed frame from CB2 that has attached shelving allowing us to get rid of the nightstand and table. That helped us create the simple, minimalist look we were looking for. I’ve also been upgrading the bedding and have some more little decorative touches to make (including blackout curtains that Jon requested). 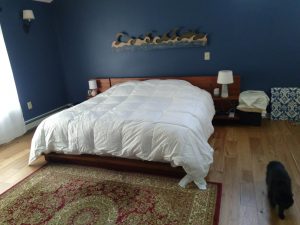 Last night, I made a temporary window covering for the little high up window in the bedroom. It’s a small, square window that’s way above head height, but it lets in light and I actually like being able to look out and see the stars at night, or the tree tops swaying in the wind, without seeing anything else. The problem is that it does let in a lot of light in the day while Jon is sleeping. At first, I was going to make roman shades, but the universe intervened and I ended up burning a giant hole in the fabric right at the end of  the project (I also crashed into Jon’s car in the driveway that day and drove all the way to the store and forgot my wallet).

Since then, I’ve been rethinking the project. I really didn’t want something permanent up there because anything would block what little view there is. I looked online and Pinterest failed me. So I decided to give something a try and not worry about if it failed miserably or not (working on my design-thinking capabilities!) I took a piece of cardboard and cut it to the size of the window, then took some quilt batting and wrapped it around and glued it to the back. Then I took some nice fabric and made a little handle for it. Since the window is high up, I needed a way to grab it to take it down. I sewed the handle on and then glued the fabric around the batting-covered cardboard. 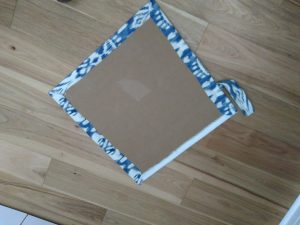 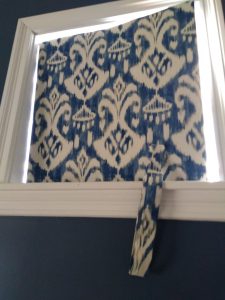 It’s super easy to put up and take down and I just put it in the closet when not in use. I tried it out today for a quick nap and it works great! And looks good too.

We also redid the bunny room. This was our guest room that’s been neglected for 13 years. Then it suffered from a lot of cat pee from our cat Donovan, who at the end of his life didn’t have a whole lot of control of things. Poor guy. In August, we got rid of the bed and moved the bunnies in. I’ve wanted them to have their own room for a while. First, it keeps the hay and mess contained. Second, if someone is pet sitting, it eliminates the need for anyone to try to catch the bunnies and put them up at night (something that I don’t think ever actually happened).  We could never totally get the cat pee smell out though and wanted to start from scratch. So we ripped out that carpet too and installed these affordable but cute patchwork carpet tiles. They’re commercial grade and can be replaced as needed without having to rip out the whole thing. Big plus for a pet room. We also gave it a fresh coat of paint in Behr’s “Calm” – a super light blue, and got rid of a lot of the clutter. We bought a new TV/DVD player combo and brought up our funky chairs from the office, to make this our new TV room.

I really like how this has turned out too. I mean, it’s a bunny room, and there is hay and bunny poop, etc. but we vacuum every day and so our best to keep it reasonable, and it’s always been a pleasant room. Now we can enjoy it. I almost always end the night by watching a show with the bunnies or reading a book in there. 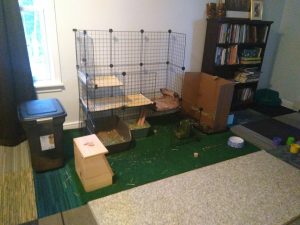 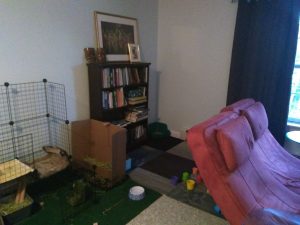 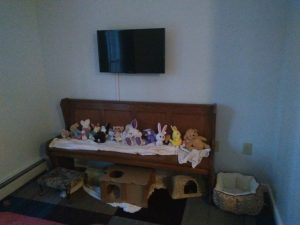 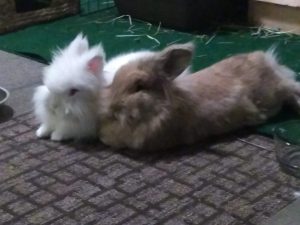 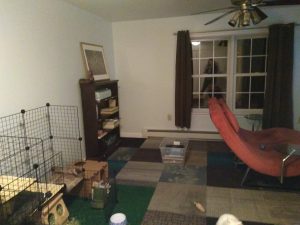 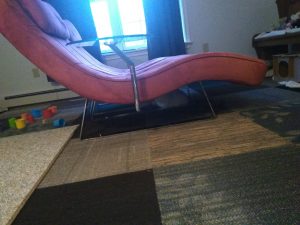 Next project is the office. I have lots of ideas, but I don’t know if either one of us is ready for a big project right now. I have my final class for master’s degree coming up soon, so I may get through that first before we tackle another big project. 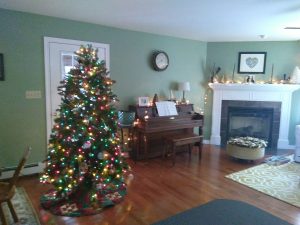 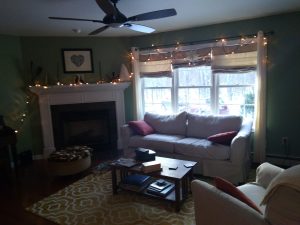 First year with my artificial tree. I unabashedly love it!!