Since I work at a college, the summer is the one time of year when it’s not totally crazy – which actually works out perfectly! Last summer, I didn’t have a full-time job, so I actually got to enjoy the beautiful Maine summer that tourists come up here for. Since then, I’ve realized that I need to take advantage of that more, and so this year, I’ve deemed Fridays in July “Friday Fun Days.” In lieu of a vacation I can’t afford right now anyway, I’m taking most Fridays in July off plus a week at the end of August.

My first Friday Fun Day was a smashing success. As a total book nerd and fan of children’s literature, I was thrilled to see that my favorite library (and the “best library in Maine” according to Down East magazine, Curtis Memorial Library in Brunswick has kind of an amazing exhibit of illustrator Garth Williams works, including many originals.  Ok, I didn’t actually know who Garth Williams was before I heard of this exhibit, but I have since learned he is the illustrator of children’s classics Charlotte’s Web (which I’m due for an adult re-reading of), Stuart Little (which I don’t think I ever actually read, but now I want to), and tons of adorable “Little Golden Books” with bunnies, and cats, and ducklings.

We arranged to be at the library for a docent-led tour of the exhibit and learned all kinds of interesting things about Garth Williams. Mostly, though, it was just fun to see the artwork. Many of them were the originals and you could see where the type for the book had been pasted in (a great lesson in how publishing worked before computers transformed things – and oh gosh, I actually remember those days!!!)

Here are some of my favorites – you won’t be too surprised that most of them are bunnies and cats. 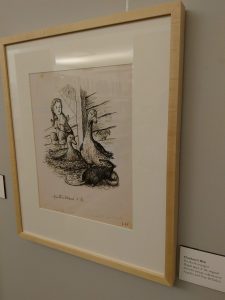 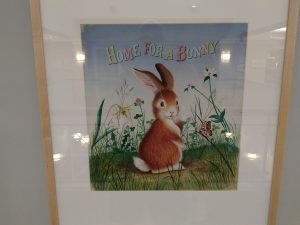 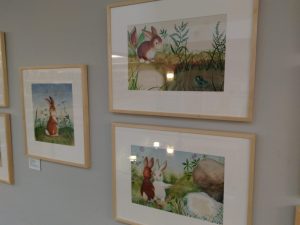 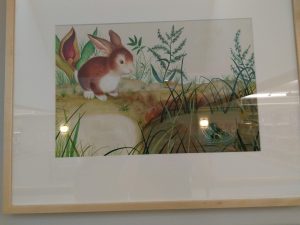 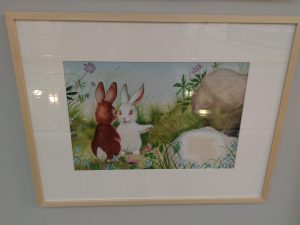 For those of you who can’t make it to the exhibit, they have a nicely done virtual exhibit that shows all of the pieces.  I’m not sure how long that will be up on their site, though.

Friday Fun Day didn’t stop there, though. We also made soap with the fabulous Jill from Mount Washington Valley Soap! I’ll leave you in suspense on that, though, and save that post for tomorrow. By then, hopefully I’ll have photos of the finished soap.