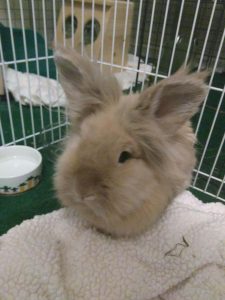 Last weekend, we adopted a new member of the family: Jazzy! I’ve wanted to get my bunny Albus a bunwife for some time, but it hasn’t been feasible. We had two cats and were already a bit overwhelmed with pet care duties. Our cat Donovan was older and had a lot of issues… he needed regular steroid doses and had recently gone blind (he was also deaf). He was my dude and I loved him so much. When he passed away in April, it broke our hearts. We buried him in the rose garden and I found a beautiful orange poppy to plant on the spot.

I was hoping with Albus and Gerry the only pets left, that they’d become closer. The fact of the matter is that Albus loves his feline friend, Gerry, but the feeling isn’t mutual. Most days Albus just finds a place to hide (his current favorite is behind the ironing board in the guest room) and would give us love for a few minutes a day. Based on things I’ve read, I started to think that a bunny companion might improve his quality of life. So the search began.

Jon and I have often joked that all we wanted in a bunwife for Albus was a spayed female mini-lop around 2 years old named Penelope. Shockingly we couldn’t find such a bunny. Jon really wanted a mini-lop (that’s what he wanted when I talked him into getting Albus instead), but they are few and far between, and I have yet to find a spayed female.

Meanwhile, I had been following a rabbit rescue in Lamoine, Maine, called Cottontail Cottage Rabbit Rescue. I don’t even know how I found them, but I follow them on Facebook and they do such good work. I’ve been wanting to visit the shelter for years now, but the 2 hour drive was a bit of a deterrent. Well, a few weeks ago, they posted a photo of what looked like a female Albus in brown. Her name was Jazzy. I emailed them, asked if she was available and sent them a photo of Albus. Then, I worked on convincing Jon that Jazzy was the one, and that we need to drive up to Lamoine!

He played it cool, and I wasn’t sure he was going to go for it, but in the end, he agreed. We drove up, met her, and fell in love. Now, the hard part begins… bonding them. 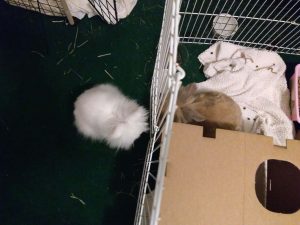 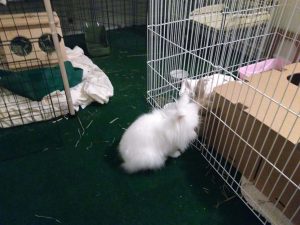 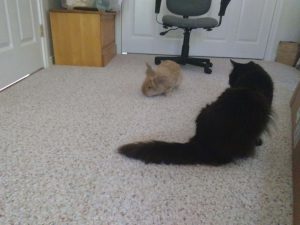 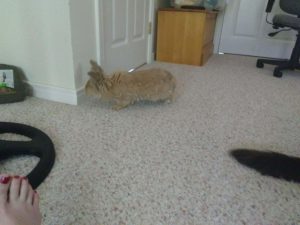 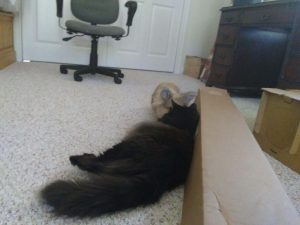 Bunny bonding seems to be more of an art than a science and there is a lot of conflicting info out there. I’m following instructions from the shelter manager at Cottontail Cottage as they certainly have a lot of experience with bunnies. She instructed me to put Jazzy’s cage next to Albus’ and let them get used to each other for at least a week. So far it’s been a few days, and all seems to be going well. They’ve sniffed each other, watched each other, even kissed each other. But I’m still nervous about what will happen when we finally put them together.

We’ve been told to try it out in a neutral space for 10 minutes and separate them if they fight. I’m soooo hoping that they just love each other and start cuddling. Probably unrealistic, but I can hope!

Anyway, I’ll keep you posted on the progress. I think Saturday is the day.