I have five days off of work and I’m taking advantage of the time to get some house projects done (in addition to bunny bonding!). My first project was to make roman shades for a large east-facing window in our stairwell that gets a ton of afternoon sun. The window is great because we have a cape cod style house where that side of the house doesn’t have any windows at all upstairs. The window in the stairwell lets in a ton of natural light into the hallway, which spills into both bedrooms on either side. On the back of the house, we have a shed dormer, so we have full size windows on the west side of the upstairs (so glad we did that!).

The issue, though, is that in the summertime, especially hot summers like this one, the light pours through that window and really heats up the hallway, and that’s where Jazzy, the bunny, lives right now. And rabbits are very sensitive to heat. We’ll eventually be moving her and Albus into the guest room, along with a new air conditioner, but for energy efficiency purposes, it’s best that we find a way to block the sun when we want to.

I considered different window covering options. I had been watching some window treatment classes on Craftsy Unlimited (now Bluprint) and though full length curtains could be really cool and dramatic. The problem with that is that the window is super high. The bottom window sill is probably a good six feet tall, and the window itself is 5.5 feet long. So that would mean a LOT of fabric, a lot of $$, and might really be a bit too dramatic for our little cottage anyway.

I have some cheap Roman shades in the living room, and they get the job done. I like that they cover the windows completely, but can also be raised to let in light and look pretty unobstrusive when raised. In the stairwell, I thought the right fabric could really add some character and softness as well.

I chose the Magnolia Home Fashions Oh Suzanni Metal fabric from fabric.com and ordered 2 yards for a total of $20.14. I also ordered the Roc-Lon Blackout Drapery lining in Ivory for $4.79 a yard. I got 3 yards since I’m planning another project as well.

I love living in today’s world because it’s so easy to find instructions to make pretty much anything. The craftsy classes didn’t cover roman shades, but I found some great YouTube videos. These were the two I found most helpful.

How to make a roman shade from Online Fabric Store.    This is the one I followed in terms of how much fabric to cut, etc. The only change I made was to use eye screws and a cord cleat instead of the pulleys and cord locks.

How to make a roman shade from Sailrite.  This one was very similar, and they also have a handy fabric calculator. I’ve watched other videos from Sailrite and they are always quite clear.

The hardware I ordered from DIY Insulated Shades
I ordered:

An iron rod to weight the bottom, cut to the correct size
A 1X2 piece of wood for the top (I realize now I could have easily got this at Home Depot and saved on shipping. They are by the dowels).
Rings
Cord
Cord Cleat
Cord condenser
Roman shade rib tape (this stuff is great – you just iron it on and then fit the dowels in. Just be sure to get the right size dowels. Mine were too big so I had to go back and get 5/16″ dowels and they were perfect).
Dowels (from Home Depot)

They have some good info here about what you need and have pretty much everything you need to make a roman shade on their site.

I probably spent about $70 on hardware, though I ordered enough to complete a second project. So, all in all, this project cost $60+. Much cheaper than having it custom made. It took me about a day to make. In addition to the materials above, you also need a staple gun, screws to screw the headrail into the window frame, etc.

I’m really happy with how it turned out. It’s not perfect. I’m not great at cutting fabric square. It’s a skill I need to work on. Jon hung the shades, and we had some issues, mostly because the window is so high. I could have made them about an inch wider as well. But yesterday, for the first time, as the afternoon sun poured in, we just lowered them and had immediate relief. It was great!

Note about the pulleys/cord locks vs. eye screws/cleats. I didn’t bother with the pulleys and cord lock because I didn’t think it was worth the money or hassle. With just the eye screws, it operates really smoothly, and it’s not a hassle at all to just loop the cord around the cleat to hold it into position. 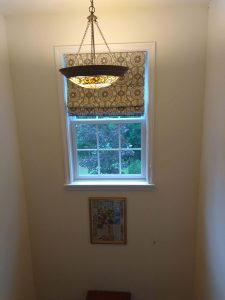 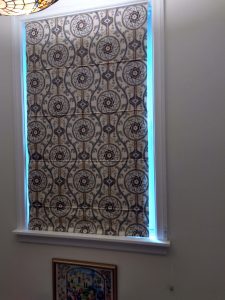 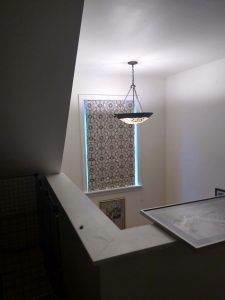 My next project is a tiny window in the master bedroom, also quite high up, where I’ll also be making roman shades. It’s a cute little window, but when Jon is sleeping during the day, it comes in and lets in a lot of lot. I think I got most of the kinks out with this project so that one should go more quickly. 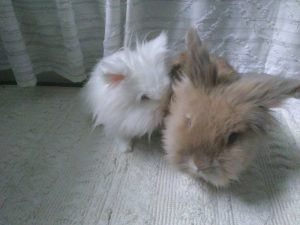 This is Day 3 of bunny bonding. Albus is reluctantly asserting his dominance and Jazzy is pretty chill about the whole thing. Are they the cutest?